When a door is closed a window opens

I’ve sat too long staring out into the ocean today. I turn to rest my cheek on a bright red shoulder, stealing the warmth that the sunshine left there. I had a popsicle and a bag of chips. I had my journal. In the ocean and the sun, I had everything I need.

What I didn’t account for were the thoughts bursting out of synapses in my brain, wondering through the details of my next steps.

The Fleetwood Mac cover band seemed to be the only thing happening in town on a Sunday night when I strolled into the Cabana, looking for something to do.

The low lights, the amateur sound tech, the shy and gentle guitarist, expertly enticing melodies to flow out of strings—it was all so familiar. I settled into a seat at the edge of the small crowd and nursed my ginger beer, watching.

What was lacking in banter between songs was made up for in hearty vocals, pouring out of the musicians from a deep and unquenchable well.

Can the child within my heart rise above?
Can I sail through the changing ocean tides?
Can I handle the seasons of my life?

I came home refreshed. I needed time away from tasks and responsibility and attempting to be part of a family I was never quite a part of. The last couple weeks of nannying had been going all right, but I don’t think I would say they had been going well. We knew this; we’d been talking about it. It may have been my four-day fever, or my missteps in wanting to engage with the children in a household philosophy of leaving them to their own world, but it was clear something needed to give.

“This isn’t working,” she said, after a couple of minutes of conversation when I came through the door.

“Time to cut the cord,” came my response.

We hammered out as many details as possible and agreed I’d stay until they found a replacement.

Time to cut the cord. What an odd phrase to pop into my head, just what exactly has been birthed in my time here? I hadn’t wanted to stay. Despite an initial feeling that I was in the right place, it became difficult to engage with the family in a cohesive manner. As time progressed, the lack of cohesion within the family itself became more and more clear and there I was, left to watch it all unfold in front of me.

Yet there I was being shown the door. I guess when I don’t align with a situation I really will be removed from it, despite all of my intentions to stick it out.

I’ll head south to Nelson next. I feel like part of me has been resisting the inevitable that I go there. I surrender now. To everything. 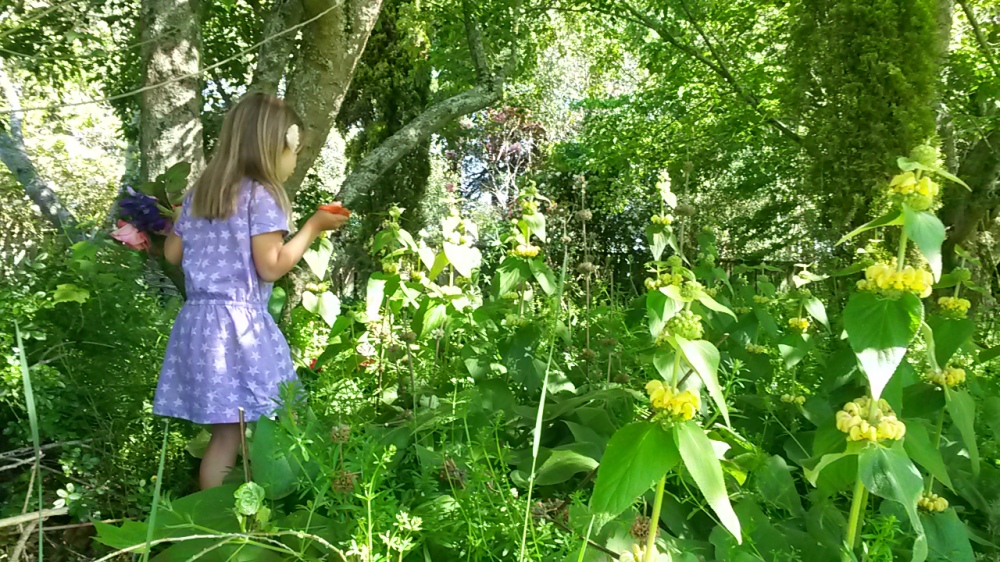 Gathering flowers in the gardens at the family farm, 40 minutes out of town. 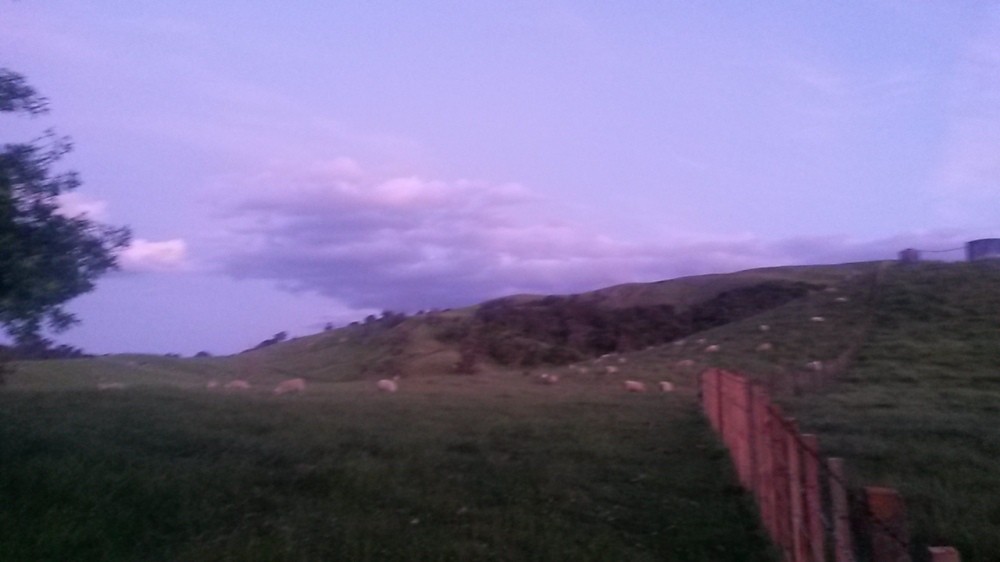 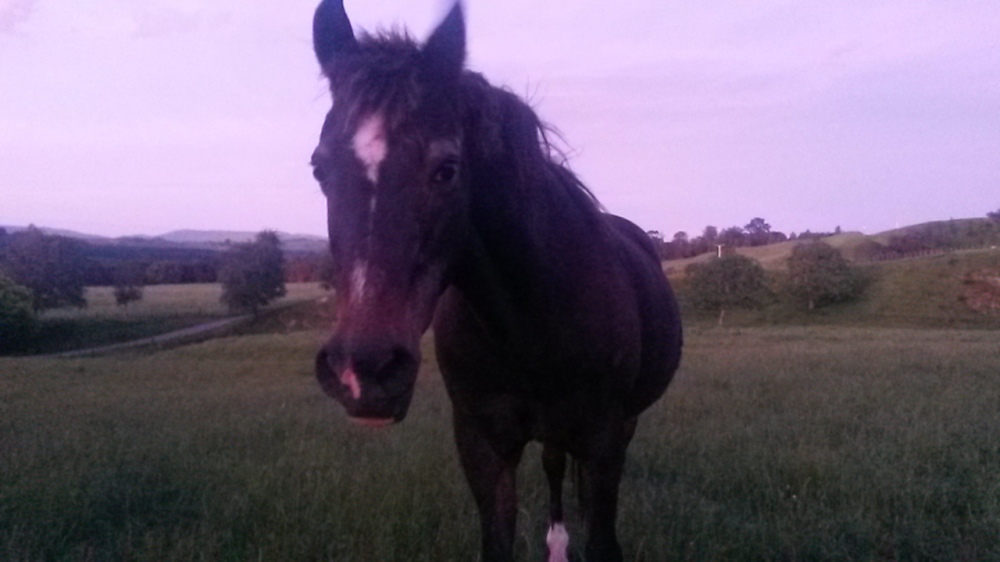 Lily the aging pony, eying me up.

There are birds hopping around under my feet and inside this grocery store’s café. They slip on the tiled floor with every labored jump, navigating the aisle between the gherkins and cans of sustainably harvested tuna.

They’ve come in, like me, looking for food. This organic grocery store and café was actually a reason why I wanted to come back to Napier. The Tibetan Buddhist centre was another, though I haven’t been back there yet since arriving yesterday in the late afternoon.

I explored Wellington for a little less than two weeks, volunteering at a Hare Krishna yoga centre. That means I was stuffed with food and got to participate in all of their yogic programming. It doesn’t mean I particularly connected with it, however. Instead of allowing the experience to unfold around me, I couldn’t help but compare it to my own tradition. 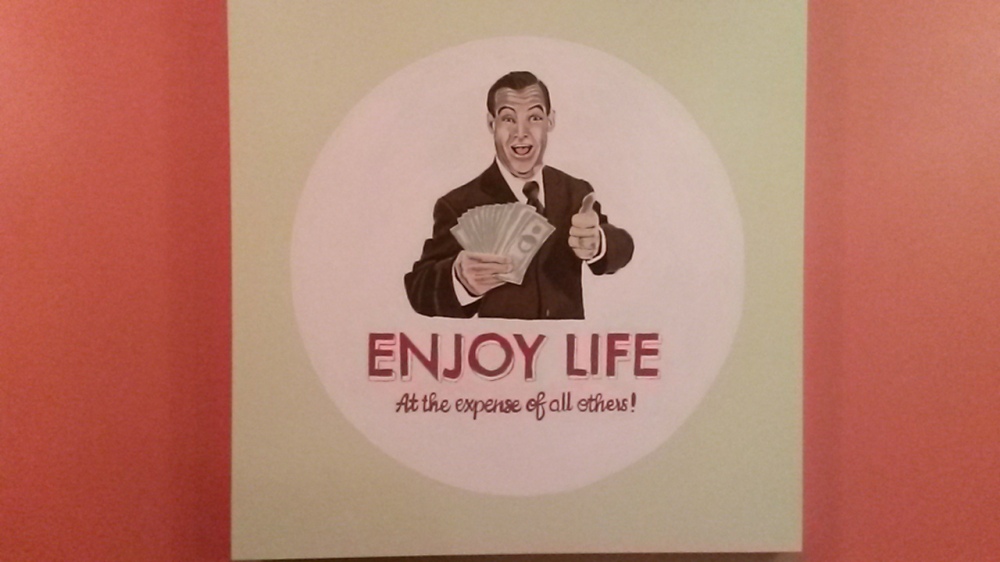 “Decoration” at the Hare Krishna place. Needless to say, we differ in which angle to approach yoga.

For much of the time I felt like a square peg being held in a too-big round hole. I’d shove blankets around the spots that didn’t fit to create some sort of seal, but it wouldn’t work, the draft would still make it through and I continually felt as if I didn’t belong. That and Wellington is terribly windy making me acutely remember one of the reasons I left Lethbridge was to get away from its dreadful wind.

On my walk to the bar for goodbye drinks with my (non-Hare Krishna) Wellington friends, I had this feeling of satisfaction. Here I was, carrying all of my possessions currently in this hemisphere on my back, ready to face the next adventure.

I stepped into Bad Grannies and found a table, letting my backpack—somehow heavier than usual, have I really acquired that much clothing and foodstuffs?—fall to the ground.

The usual bar ambience surrounded me. Burly man out front, backlit liquor bottles behind the counter, tall stools with nowhere to put my coat and loud music coursing through it all:

Yup. That about sums it. 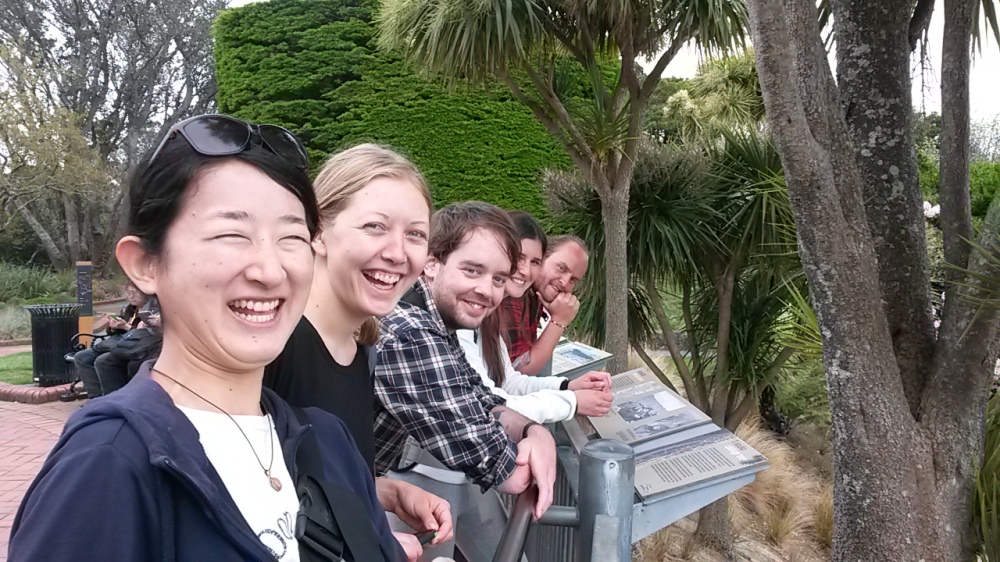 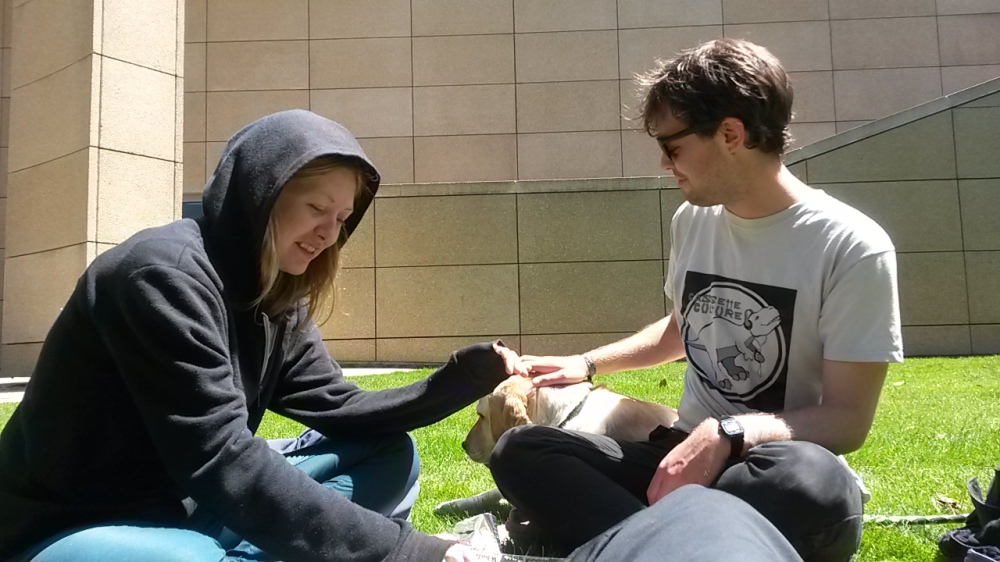 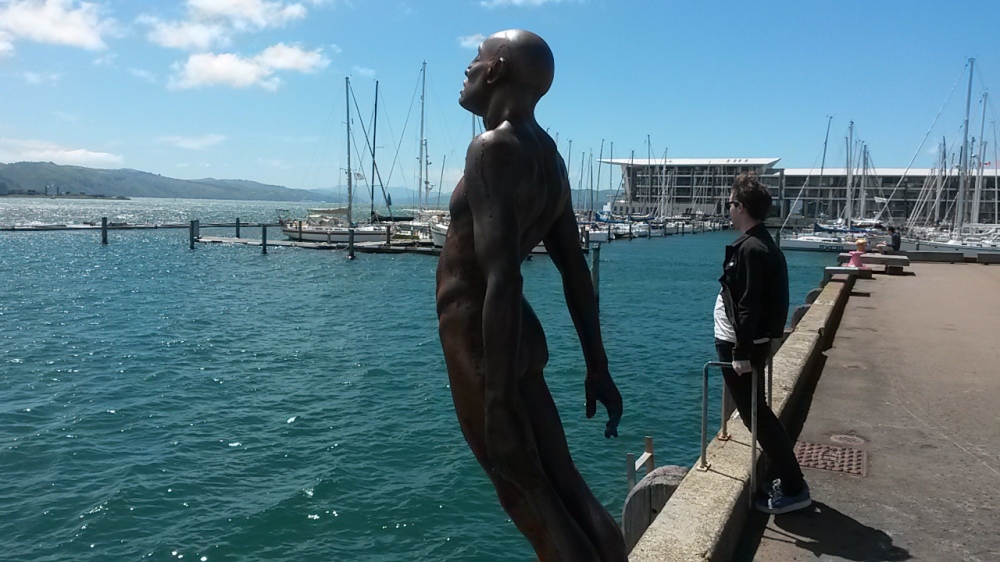 Dan braces himself from the wind along the harbour next to a very silent man. 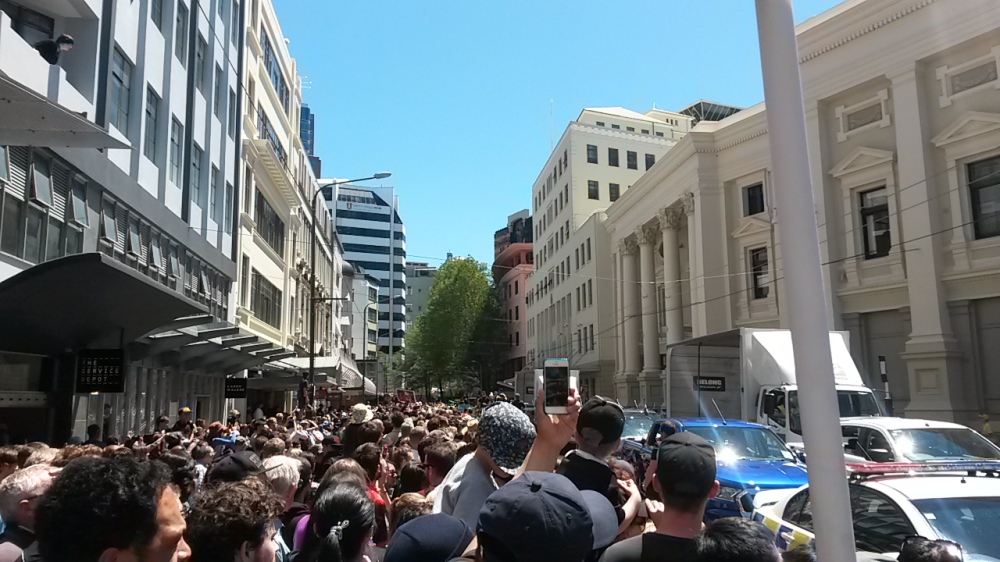 New Zealand’s rugby team, The All Blacks, come home after a triumphant victory in the Rugby World Cup, held every four years. 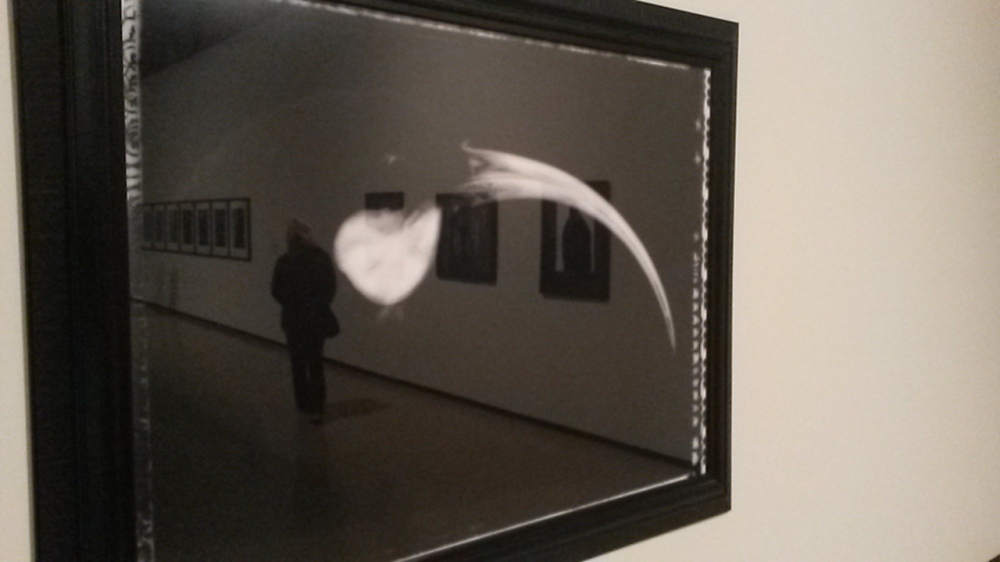 “The Pressure of Sunlight Falling,” A photography exhibit breathes life into unexpected images. Here, an extinct Huia with my lovely friend Verena in the reflection.

I really did enjoy Wellington. The tiny shops, pedestrian-only downtown zone and ample waterfront access all appealed to different parts of me. It’s a city where there is always something to do no matter what I’m in the mood for. I’m glad I’ll have to go through it again to catch the ferry south, but I’m also glad to be in a smaller town with a slower pace. 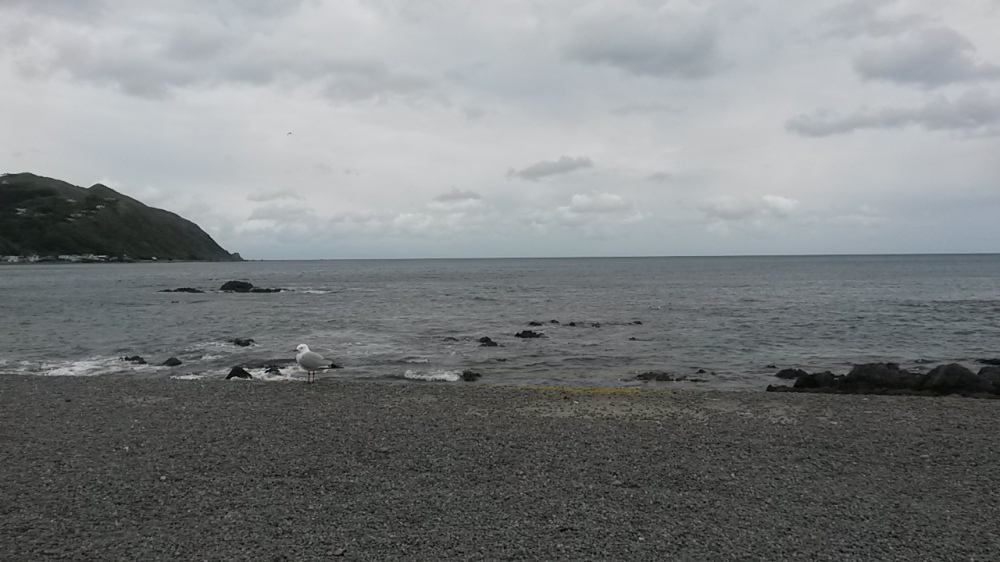 A stop on the drive up to Napier. The island on the left is a bird sanctuary clear of all rodents. NZ has no native mammals. All rodents have been brought in and wreck havoc on the bird populations. Islands like this one serve as a refuge where near-extinct species are provided safe breeding and nesting grounds. 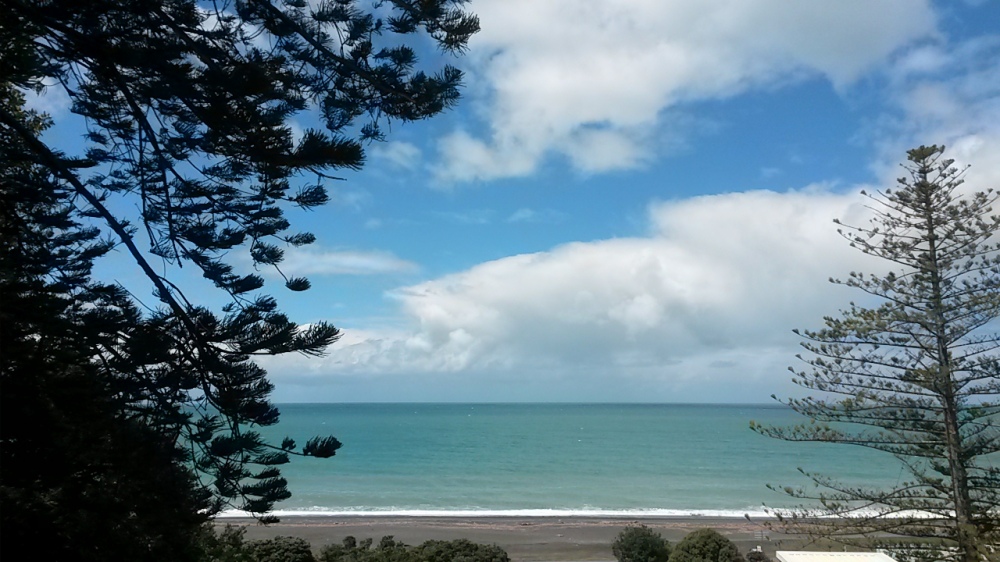 Napier. Napier is lovely, from the little I really do know about it. It still has that irritating New Zealand habit of all its cafés and restaurants closing far too early, but it’s the kind of place that I will be able to relax into that a larger centre just doesn’t offer. Also, I got a call today about a job I’d applied for and since given up on so hopefully after our meeting tomorrow I’ll have some employment that will keep me in the area until February. 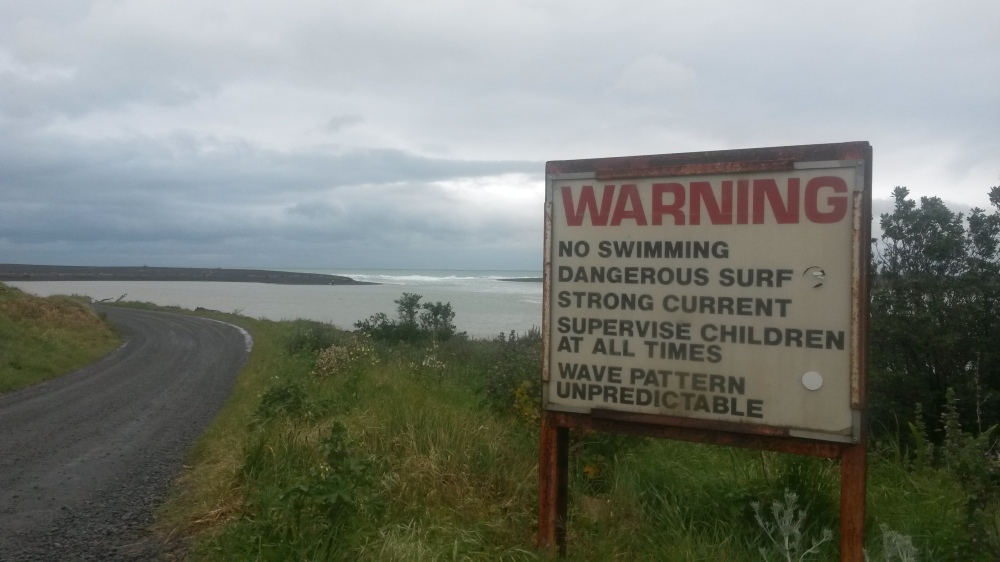 With its cacophonous, steady presence I am endlessly grateful for the existence of the sea. Here on the southern tip of the North Island, the rising swells crash fearlessly onto rocks. I would not want to swim here. Instead, I want to explore where high tide crashes into Lake Onoko, I want to do yoga, watch the waves. I want to write.

Kate and I took a turn toward to the cape on our way to Wellington, the capital and largest urban centre on the southern part of the North Island. We’ve been sleeping in her car, crisscrossing the country on our way down. We pass rolling hills dotted with ewes and lambs furiously eating and we wind around narrow passes through the ranges. It’s been a spectacular drive. 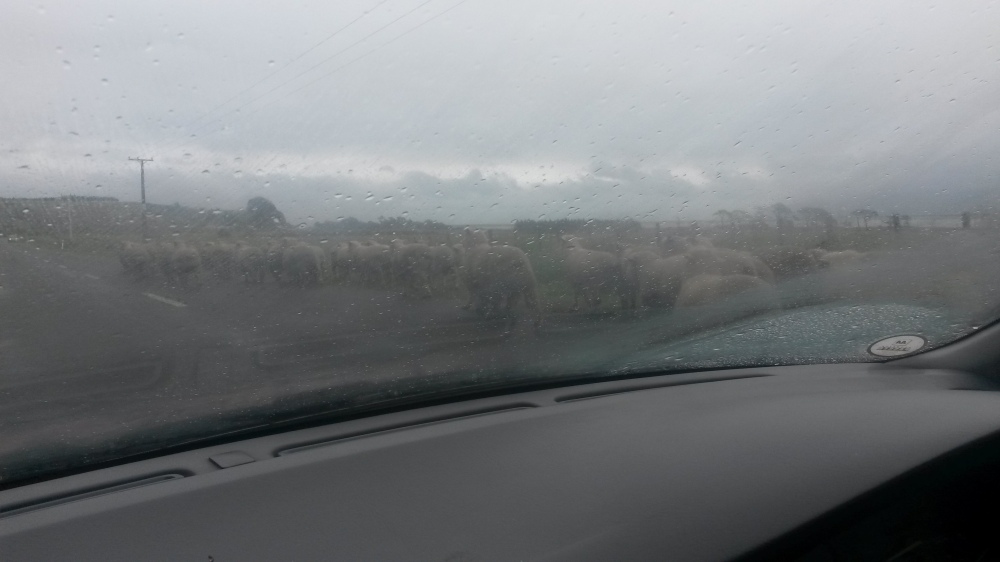 Yes, that is a herd of sheep being guided down the middle of the road, running from us as we passed them.

This morning I wake and crawl out of the car. I know my yoga mat is somewhere near Kate’s head and don’t want to wake her, rummaging around for it, so I settle for a sarong and walk five metres to the ocean shore. We slept in the campground alone last night. I spotted another car behind a fence across the field but we essentially had the place to ourselves. With a kilometer or two from the shore to the mountain range inland there is plenty of room for a flat curving road to take us down to the cape. A small cluster of houses makes up a town and a few picnic tables sprinkled over sheep-shorn grass gives us a free campsite. Perfect.

I lay my sarong out equidistant between the car and the sea. The ocean. Sometimes, after even a few minutes absence from it, my heart will leap at seeing it again. As if anytime away from watching waves tug with desire at the shore has been wasted. The deep calm I feel looking out at the solid line of sea meeting sky is surreal. 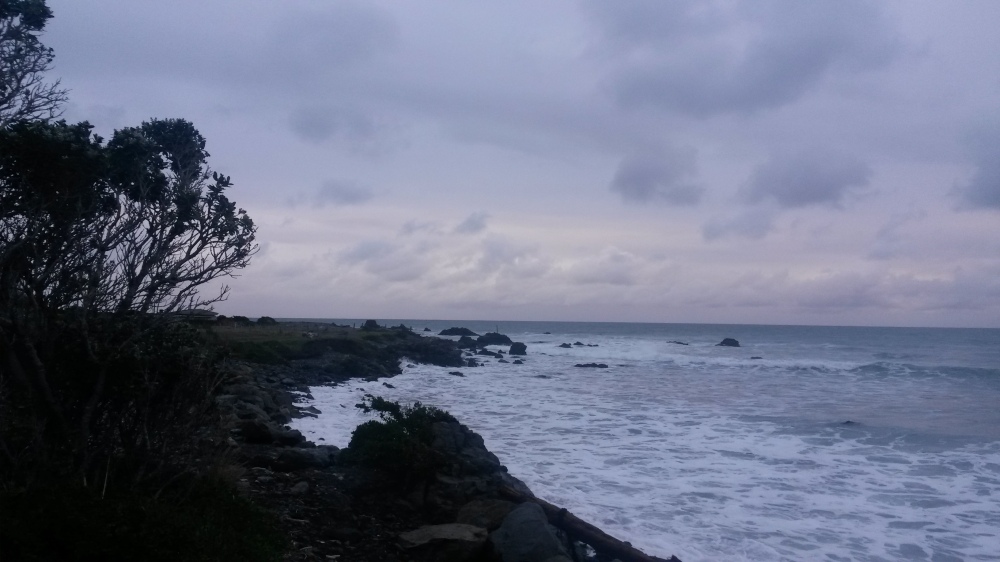 I begin in mountain pose. Setting my feet firmly on the ground, I rotate my pelvis forward, correcting an unconscious habit, and stand. I love this pose. It’s probably me favourite asana, though I’m a little reluctant to smother those kinds of superlatives upon a practice. I think about times I’ve stood in this pose. Memories of my teacher training come to me. Oh it would be so nice to be in Nelson BC when I return to Canada. I’ll spend a few months at the Ashram and then find a place nearby to live. My parents will be living there by that point. My father’s big surprise retirement party is coming up. You know, I bet I could change all my plans and get a plane ticket to be there in time for it. It’s the first event that I’m reluctant to be missing in all the time I spend away from those I love. Christmas? Those come every year. But a retirement party? Once in a lifetime. I feel the pull of regret.

I’m moving through sun salutations by the time these thoughts bubble out of me. I catch them and breathe. I move my body through space and time.

Okay, I’m here. In New Zealand. I loved Napier, it had such a great energy and friendly people at the organic grocery store. Maybe I’ll settle there for my year. So many choices, so much to explore.

I look up toward the sky, my body in triangle and my mind elsewhere. I breathe.

Yesterday Kate and I drove to where two fishermen were hauling in their catch. We stood on the black-pebbled surf until the wind made it through our layers and our cold bones suggested we get back into the car. As we walked back, the hum of an approaching quad came closer. The man stopped, showing us his catch for the day: about a dozen fish, neatly stacked in the box on the back. “I’ve got work to do now,” he said. I smiled and waved as he rode on. The ocean offers something for everyone.

The rumble of waves and moving rocks continues on. I ride their sounds into savasana, relaxing my feet and toes. That email, I still need to respond to that email, the one from the centre I’ll be going in a couple of days. Relax calves, calves relax. And suddenly I am here, in my body and yet not, my mind steadily arriving.