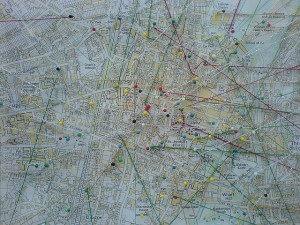 Furtive words to the acquaintance in the passenger seat beside me.

The back of the truck we inhabited: a 10 foot square box full of furniture we’d been picking up at various parts of the city and were taking to my soon-to-be furnished abode.

Earlier that day I’d felt the stamina of adrenaline from entering into a new city/province/country/life begin to quietly fade. Just how was I going to get all these things I’d networked my way into ownership of into my apartment? A moving company was out of the realm of my limited budget. I could rent my own U-haul, but who would help me in this city of 3.3 million faces I know less than 10 of?

The inventive part of me wanted to scrawl a sign asking for help and walk around a busy area.

The intuitive part weighed in, knowing I would refuse an offer if it didn’t feel right and I fed the thought forms as they began the subtle process of manifesting into reality.

Finally, the nurturing part won over with strong evidence I currently needed to be gentler on my introverted self than that. I’d made a last-ditch effort and asked the person with the extra futon frame for me, someone I’d met in person only once four years ago and who floats in the same yoga teacher circle as I do.

What is it in me that is so tormented when asking for help? Introducing the word “receiving” has this way of evoking such feelings of anxiety.

“No problem” came the reply. Help moving came with “no problem.” My request had been received. Maintaining a relaxed attitude and receiving the help is entirely different.

I began the trek on my own, manoeuvring a giant truck through roads full of drivers known for their inventive style of transportation. This is where my handy-dandy device comes in: GPS at a touch of my fingers. Oh smartphones, where would I be without you? Well, probably still trying to figure out how to navigate all these one way streets, actually.

I discovered an interesting thing about GPS.

There’s no judgement about where I am or where I’m going. There’s only complete acceptance of my position, and assertive encouragement sending me in the direction I express I want to go. I aspire to be so present and unassuming, to be so accepting of exactly where I am, wrong turns and all.

Okay, so where I am? Yes, in this new city. But where am I, really?

Authentically giving means seeing what needs to be done and doing it if I have the resources to. It means I have to be clear with what I have—time, money, or any other form of energy—and clear if I expect to receive from the interaction. If I’m giving out of hopes others will return the favour for me, or to feed an identity of myself as a giving person, then it isn’t coming from an authentic, unconditional place.

Back to that question, where am I, really? I’ve moved back to my home country to a province I’d never been where I don’t speak the language. I’m recovering from emotional upheaval that shook me in ways not even my divorce did. I’m about to enter back into school after a six year break, have spent the last five nights sleeping in an empty apartment and have asked someone I barely know to help me haul around some furniture.

Where am I? I’m crawling along downtown rush hour traffic at a snail’s pace late to pick up a couch. People are helping me, and all of these anxieties are channeling into not feeling comfortable receiving.

I know what I can do. I can relax. I can stop thinking others are annoyed at the fact that I need help and they’ve (willingly) agreed to offer it. I can breathe. Into every tense cell of my being I can bring in breath.

Of course all of these things are great to talk about, but also require committing mental energy toward them. I know what happens when I learn to receive, I work through all the things I’m facing lately. Let’s look at the facts: we’re receiving all the time.

Since my brain sends signals to the muscles in my diaphragm that would override any attempt to stop breathing by mental power alone, I’m going to be taking in air whether I want to or not. I even receive new oxygen when I’m sleeping.

Since my senses are all fully functioning biologically, I take in information all of the time. I can’t help it. Okay, this is a good step. With all this information I take in, I can get my mind out of the way and accept that people truly are willing to help, to give.

We make it to our next pick-up spot, a friend turning his office into a virtual one and getting rid of the furniture, too.

He’s there early, generously taking time away from his family, and taking the legs off my soon-to-be kitchen table. I breathe for a moment (yes! It’s working!) and comment that receiving help from people is giving me anxiety. He stops and looks at me with his usual bubbling warmth and positivity that I am in awe of during a time with difficult health issues present in his family. “Well you know why we are” he says, truly expecting me to see it as obviously as he does. “It’s because we care about you.”

So its true, I’m not usually like this, a bumbling mess of unawareness with an underlying shakiness: forgetting where I left the screwdriver and needlessly going down to the truck to look for it, thinking I’ll multitask by sliding out the couch to put its legs on, forgetting the table is leaning up against it, or walking out of the apartment leaving the door unlocked and my wallet on the table.

I’m not usually like this, and when I am I know that it’s okay, that there are people who care about me that will accept me and want to give to me with whatever of my personality aspects want to reveal themselves. It may be frenzied panic as I load furniture, or fear that people are giving when they don’t actually want to, but through it all, true generosity inevitably makes its way into my life.

And that’s something not even I can help but receive.