We shall not cease from exploration, and the end of all our exploring will be to arrive where we started and know the place for the first time.
~ T.S. Eliot

I’ve recently been visiting family in my hometown.

Let’s just say that the place where I grew up doesn’t reflect my values. Actually, let’s say more about it: Southern Alberta is a politically conservative area. I don’t really feel as though I fit in here. Since I was young I’ve always known I would leave. And leave I did—though I come back and visit.

Growing up I had notions of a quaint and frivolous European lifestyle. Stopping by the bakery, meandering through narrow, cobblestone streets. I wanted it. I wanted something different than vast tracts of brand new subdivisions; residential areas specifically planned to be far away from commercial stores to keep traffic down. Something different than wide streets full of large, gas-guzzling vehicles. I wanted to be able to buy what I made for dinner that night on my walk home, not circuitously drive, dodging cul-de-sacs to get to my house.

Since then I’ve lived far away, across mountain valleys, continents and oceans. I’m back for a visit now. And for supper we didn’t have enough of something.

As I was walking the block and a half or so to the grocery store, I realized that I was getting my wish—I was able to walk a short distance for the needed ingredients for supper that night.

It was one of those “ah-ha” moments. I realized (again and again…and again) that life is what I make it and will change depending on my attitude. I can take whatever it is I am given, and consciously choose to let it fit into the life that I want to create for myself.

With this attitude, I could live anywhere. Sure, I would make particular decisions—such as living close enough to a grocery store that I would be comfortable walking to it—but I know that I can take responsibility for my life and not shift it off to the rest of society around me. If I don’t like something, change it. If I know I want something in my life, create it.

I walked along my old streets with a smile on my face, feeling content. The only disturbance was the usual one. The years-old grocery store renovation that’s exchanged the spots of the “in” and “out” doors. It’s something I’ve never seemed to let soak into my memory, and usually have a split second where I stand in anticipation, wondering why the automatic door isn’t swinging open for me.

Seems like the perfect time to update my understanding of my hometown.

I could see it coming from miles away.

A clear, strong line, holding the unbearable weight of an entire sky full of clouds. 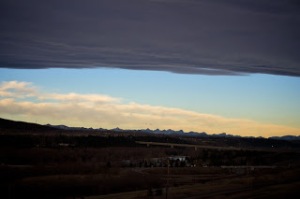 A Chinook Arch. It’s been a long time since I’ve seen one of these. It’s above my head right now; I can see it when I glance out the window. Arriving with such bursts that shake the streetlights, I know it will bring warmth. The kind of warmth I need, that curls around the space inside of me. The space I’m trying to cultivate, the space I’m trying to sit with.

I’ve been feeling deja vu lately. Last night, sitting in the darkened bar, yelling over the stereo while waiting for the next band to set-up. Catching up with random acquaintances I haven’t seen for years. Somehow I felt like I knew it would all happen this way. These people would be standing there, the lights would be dim like this. It makes me know it’s all happening the way it should.

I’ll get these moments where feelings emerge from hidden spaces out of air. Between the force of magnetism holding the electron in its ceaseless orbit is a memory. Something aligns and the memory is free to emerge out from where it was. Only nothing’s actually changed, it’s still there like it had been, and the present moment’s ability to see it is the only thing that’s different.

I get comfort in this. In knowing that awareness is expanding to include these previously hidden spaces.

Maybe that’s what a chinook does. It pushes something else away, the cold and stagnancy of still-holding-on winter, and lets warmth take its place.

It can be quite violent, when it comes. It’s a warmth that wants to ferociously edge its way into every snowdrift’s edge, every broken piece of me.

When I was young I would walk out on the country gravel roads until I surrounded myself with fields. I’d let the wind lift my hair from my face and trail off my fingertips as I stood, open-hearted facing the West. It was some sort of cleansing ritual for me, to sweep away the tumultuous emotions of my teenage self.

Here I am, “home” again. This place I grew up. Letting the wind rush over me as it arches high above the sky. Releasing pain and anger from the past. Letting go.

To say I’d stepped into Siva’s ring of fire and been shaken so much until I didn’t know what direction I faced would be an understatement.

Memories to capture of these last weeks:

Some are too hard. Some fill me with yearning and sadness because they are full of love that is now without a conduit to be expressed.

Closing the door of the new room I temporarily inhabited. Expecting the jingle of wind-chimes that, for years, was always on bedroom doors of where I’ve lived. The absence of them in the last four years making this expectation very confusing. Explained by that feeling of home being present. Of having a place that is cared for and full. Gratitude.

A tea house. Learning how to pour. A candle under the hot water carafe (is that why they’re called tea-lights?) Going to the shore one last time and listening to the halyards jangle on the boats still in the water.

Downtown Boston. Arriving in the evening. The vast expanse of downtown highrises. It’s not the biggest city I’ve ever been in, but it’s the one with the largest downtown. Awe mixed with a hint of fear. Like here is this giant beast, every part of it alive and crawling. People everywhere. More people seen in one sweeping view than I’d seen in the last few months combined.

Kind people at the station. Helpful and jovial.

An hour or two of sleep before the two people in the seats across the aisle started getting to know each other. Two in the morning is not a good time for conversation. After crossing the border the seating got all disarrayed. The social norms of staying in the same spots were forgotten and I headed near to the back of the bus where I could have two seats to myself. Attempts to whisk off into dreamland foiled. Light on the thin membranes of my eyelids. Stubble poking through flat, snowy, wind-swept fields. Canada.

Attempting to order tea in French. English being automatically returned to me. Entire trains full of people—there are so many of them! Am I really another one of them, one of these inhabitants of a city?

I am anonymously autonomous. The most striking part of me that helps me fit into city life is that I walk fast.

Friendly staff at Futureshop where I buy a cellphone—only after looking up to see when Mercury went conjunct (it was at nine yesterday morning, was able to therefore buy a communication device without worry.)

Siva: the destroyer of obstacles. Life turning on a dime.

The Divine destroys but also creates and sustains. I rely on all of these three parts of the Hindu trinity to make my way into the world.

I’m thinking about a moment in my last days in Maine, walking home in a blizzard and turning instinctively towards the shore. It was night and the faint light of occasional street lamps reflected off the endless falling flakes of thick white snow. I took each forward step toward the water in this eerie yet peaceful dampened quiet. I couldn’t really see in front of me, everything was grey. I trusted, though, and realized how symbolic a moment it was as I walked, then gathered up snow, rolled it into big sticky balls, and shoved them down the steep hill to the rhythmic tide below.