I bought a cell phone the other day.

This despite the fact that I have purposefully not had a cell phone for approximately five years due to the effect holding an overpowering signal receiver near one’s head when carrying on a conversation has on the body.

It hasn’t come yet—they were out of stock of the model I wanted (read: the cheapest one) so they’re shipping it to me—and I plan to use it mostly for text messaging, but my future use of said device will be expressly in order to live as though I were actually living.

“What an odd concept,” you might say, “for aren’t we all indeed living?” Yes, we sure are. But I’ve noticed an—unfortunately—common personality aspect of my life rearing its head recently that tends to put living off into the future.

I watch myself wear the same pair of pants way too often despite the fact that I recently discovered the joy of actually putting effort into my appearance. How it can boost confidence, be a reflection of happiness, and all that. (Also on this cell phone shopping trip I went by the Goodwill and successfully faced the horrendous task of buying new pants.) I would pull on those old khakis and think to myself, “I’ll wear clothes I like more later, when things are going differently in my life, when I feel I have more agency to live the life I actually want.” Oh, Guenevere. That’s exactly when I need to do those little things that make me feel empowered.

So it’s true, I haven’t been feeling empowered lately. I’ve been losing sight of the fact that I am responsible for my life right now and to push away that power through blame or feigned ignorance is an unhealthy expression of apathy. I’m learning.

And, more importantly, I’m changing my ways. I’m creating opportunities where, in the past, there were none. I’m pulling up my socks and following up on doors that have creaked half-way open. I’m doing this with courage, because we all know courage is not the absence of fear, but the the willingness to take action in spite of it.

Buying a cell phone and buying new pants are part of this change, but they’re not the only part. The most important part is for me to be willing to face every day with the wide-eyed wonder that I’ve been missing lately in my shuffling-along-with-my-eyes-to-the-icy-ground attitude, hoping that the sun will come out. Well, guess what? The sun did come out. I can now see the doormat that had previously been hiding under four feet of snow and ice before this week’s rain and warm temperatures managed to root it out.

This means that not only can I get out and walk around in whimsical spring-like weather, but that the fed-ex man will have an easier time bringing me my cell phone when it’s in stock next week. I’ll text you when I get it. 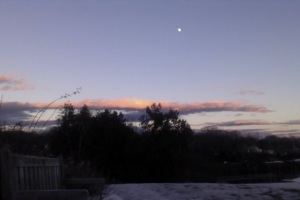